skip to main | skip to sidebar

Ok, first I want to let you all know that I'm an aunt again....YAY! My niece B was born about two hours after my last post. She is a cutie! We took the twins to visit her, I thought they would look like triplets but they look nothing alike...lol. She has tons of light brown hair, my girls are bald...ok SR has a mohawk but SM is definitely bald. Anyhow I'm hoping to visit them tomorrow, I'll take my camera so I can snap a pic of her to post for your enjoyment.

Now on to my new career...I'm going to start painting murals, ok that's funny. But really I actually painted a mural on the girls bedroom wall. First I had to paint the room since it was totally boy blue. Can't have that...so I painted two walls brown, it's called Antiqued Earth and the other two walls were painted Porcelain. Then I went online and found this 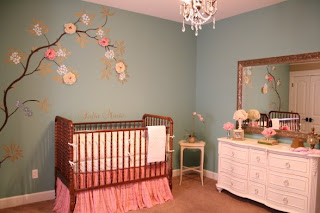 I love everything about this room. I even love the wall color but G's room is a green/blue and if you remember I just redid my dinning room and the color is a blue/green. I can't have every room painted the same color...so I had to switch things up a bit.

Here is the room before I painted....and from when K and T were living here obviously they didn't like to clean. Anyhow you can see the blue walls...not the greatest picture but you get the idea. 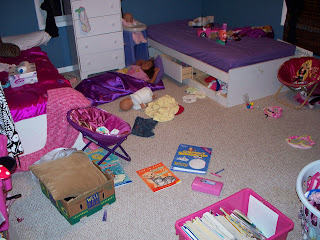 This is the Antique Earth... 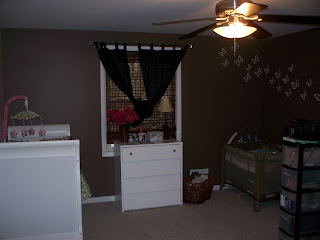 This is the Porcelain... 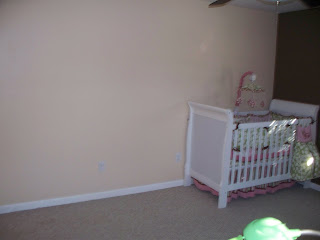 And this is my masterpiece...lol. I should have taken more pics from the beginning but you can still see the transformation. 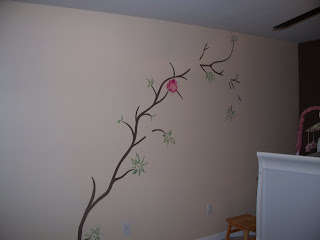 Everything is done except the bird on the third branch. A is going to finish that...I would probably make it look like a frog or a monkey. ;) 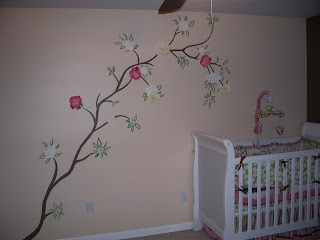 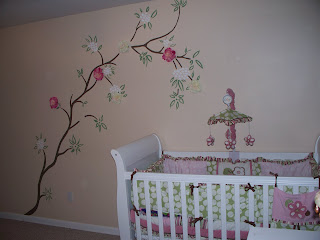 If you are wondering how I did this...it was easy....kinda. A is an artist, so he made a drawing of the branch on a piece of copy paper (real fancy) then he put in it his trusty old projector and projected it onto the wall. I was the lucky one who got to trace it and basically painted by number...does this make me an artist???
My mom and dad asked me what I'm going to paint on G's wall....oh goodness, here we go again.
Posted by GsMomAswifey at 11:37 AM 7 comments:

So my SIL is still pg. They scraped her membranes (whatever that means, sounds gross though) a few days ago and still nothing. Hopefully soon!

As for us, we've been busy getting the girls bedroom together. Well, I've been busy. A basically did everything in G's room so it's only fair that I paint and decorate the girls room. It's so hard picking out wall colors and bedding. I decided to go with neutral colors on the walls and more girlie colors in the bedding and wall art. We only bought one crib thus far, it's still unknown if the girls are our forever daughters. We figure they can share for a few more months. But last night was interesting, the girls are just over three months and they are starting to move all over, even trying to roll. Anyhow, A got up about 1am to change and feed them, he said they were in a figure seven...with SM (the older and bigger twin) kicking SR in the head, could it be sibling rivalry already (wink,wink)? The crib is definitely much bigger than the pack and play they were sleeping in. We'll just have to put each girl at each end instead of side by side. BTW, if you can't already tell, I'm in love. The girls are beautiful and I'm attached big time. I just look at them in awe, they are such miracles.

As for G, he is doing awesome! He is getting so big and talking up a storm. I'm truly amazed at his ability to express himself verbally. This past Saturday was his first Sports Sampler class at the YMCA. He will learn about basketball, soccer and bowling....which is right up his alley (no pun intended). He absolutely loves bowling. He bowls on the Wii and he also has the F.isher P.rice bowling set that he can't get enough of. A, myself, the twins and G all trekked down to the Y on Saturday to watch G meet his coach and all of his new friends. G was a little shy but he did really well. No meltdowns, except near the end...he did not want to turn in the basketball or leave. But overall he did great! A and I decided that we'll keep him in some sort of class at the Y just to get him accustom to social interaction. Here are some pictures Daddy took Saturday. G wanted me to play with him, A was a little sad about it but he understands that G is a Mama's boy...lol.

G and I practicing passing the ball... 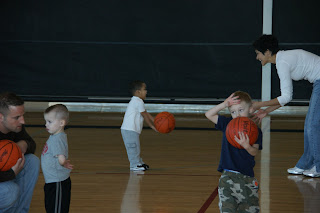 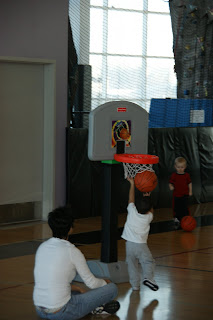 G loved the hoop, he couldn't make the shot but he kept trying. G's cousin N has an old hoop just like this one, we are going to clean it up and bring it home. Practice makes perfect...lol. 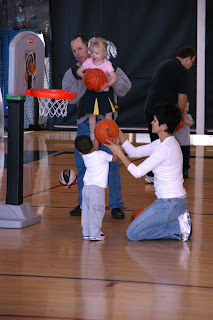 G runs non-stop, he has so much energy. I wish we could bottle it. 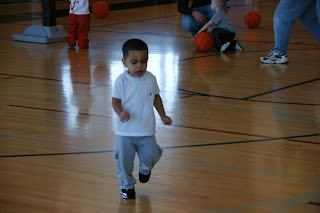 A group picture...if you notice the lady standing up with the blue t-shirt on, she fosters too. It's so nice to meet other foster parents, who truly understand. I'm sure we'll be talking in the weeks to come. 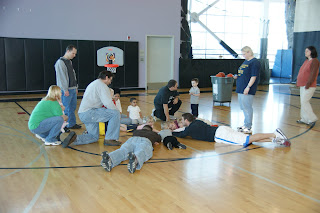 G when he realized the class was over...so sad. 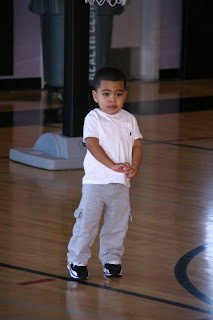 GsMomAswifey
After years of trying to conceive a child my husband, A and I decided to embark on the wonderful journey of adoption. This blog is dedicated to my son G, whom I adore with all my heart.